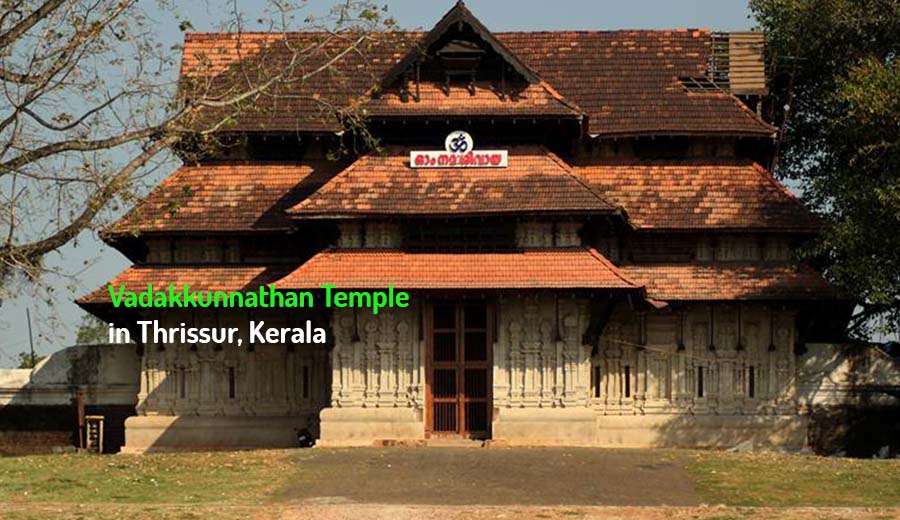 Legend and heritage are in the wind of Kerala. Located in the town of Thrissur is the ancient temple of Lord Shiva, Vadakkunnathan Temple. The temple is very peaceful and you could feel much blessed in the calm and quite temple complex. In 2012, twelve places from Kerala have been selected by the Archeological Survey of India to include in the world heritage site of UNESCO. The temple stands on a hillock amidst the city of Thrissur in the state of Kerala. A large stone wall encircles the temple complex.

The structure of the temple is that of the classic style of the state. There are four towers on its four corners along with a sacred stage for performing rituals and art forms. The inner walls of the temple are depicted with mural paintings dictating episodes of the great epic, Mahabharata. The shrines and vignettes are crafted out of wood. Every year on the day of Pooram (when the moon is seen with the pooram star), the Thrissur Pooram festival is celebrated in Thekkinkadu Maidan.

Legend Behind on Vadakkunnathan Temple

We can feel the vibration of the temple in a more beautiful way if we know the history of the place we are going. As mentioned in the Brahmanda Purana and many other places, it is said that the temple was discovered by Parashuram. He is believed to be the sixth incarnation of Lord Vishnu according to Hindu mythology. He was born on earth to bring an end to the evil Kshatriya worriers. After exterminating the Kshatriyas he felt himself down, so to purify himself and balance his deeds he performed ‘yogya’ meaning performing puja in the presence of Agni or fire that also includes offerings to Brahmins. In the offer, he gave away all his land and decided to retire to some unknown place. Accordingly, he got a blessing of a piece of land rising up through the sea. This piece of land is now called Kerala. Parashuram requested Lord Shiva in Kailash to once appear on the land raised above. Shiva with his family stopped in Thrissur and then disappeared leaving behind Shiva lingam under a banyan tree. This place is known as Sri Moola Sthana where the divine Shiva lingam was worshipped. Later the ruler of Kochi decided to shift the lingam to a better place and thereby built a temple. This is the history believed to be involved with the temple.

The visiting hour starts from 4 early in the morning till 11 am and then again from 4:30 to 8:20 in the evening. It is to be noted that non- Hindus are not given permission to enter the temple. Poojas and rituals are performed daily in fixed timing of the day. There are various orders according to which the devotees pray in the sanctums of the temple. Lord Vadakkunnathan is not taken out for any possessions. During festivals, the main festival being Mahashivratri is celebrated with many cultural programs. Millions of lamps are lighted at this festival. Aanayotta, feeding of elephants is a festival dedicated to Lord Ganesha and Thrissur Pooram are other popular festivals of this temple.

Deities of the temple

The main deity of the temple is the Shiva lingam mounted and covered with ghee that took shape of 16 feet high mound. Decorated with gold and there serpents at the top, it is the only lingam that cannot be seen. It has been compared to the snow-covered mount Kailash parvat. The ghee that has not been cleaned for years has accumulated and taken this shape. But to surprise, there is no foul smell and it never melts in summer. Other deities of the temple sanctum are Krishna, Nandi, Ganesh, Rama, Vishnu and any other forms of the one and only Lord.

The Vadakkunnathan Temple is situated 2 km away from the main city of Thrissur. Thrissur railway station is located nearby. Trains from major cities such as Kolkata, Chennai, Mumbai, Delhi, Hyderabad etc are directly connected with Thrissur. There are many budget and comfortable hotels to stay in Thrissur. Highway Palace Inn, Grace Guest House, Gurukripa Heritage, Central Hotel are some of the places to stop by.